I am sure that the hearts of all of our lovely Nazarene Essene Community internationally are united as One in sending out love and our support to the people of Paris at this time, following the devastating fire that took hold of Notra Dame Cathedral last evening. A Cathedral that I have visited many times since a child with probably the most beautiful stained-glass windows in the World, with a close second at St. Anthony’s Church in Compiegne.

Following my death at the stake in Rouen Market Place in A.D. 1431 aged 19 years, having been set up at my mock trial for heresy as a ‘Witch’ for being more ‘Spiritually Gifted’ as a Medium than my disconnected pro-English accusers, a quarter of a century later, my dear mother Isabelle in 1456 succeeded in attaining an appellate inquiry approved by Pope Callixtus III at which she spoke in Notra Dame Cathedral, who threw out the charges against me and declared me a martyr. In 1803, Napoleon Bonaparte made my former incarnation of Joan of Arc a French national symbol and just over a century later I was beatified in Rome. In 1920, nearly 500 years after her death, I was canonised by Pope Benedict XV in St. Peter’s Cathedral.

This major fire yesterday was symbolic on Earth materially of a Universally major event that happened in CHRISTENDOM Spiritually, of which I am not at liberty to speak about yet, that happened at the same time in Heaven. 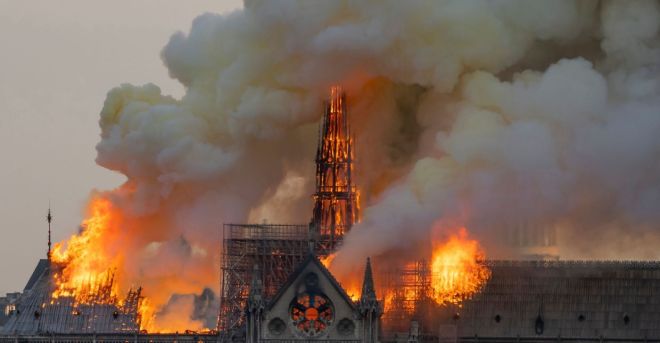